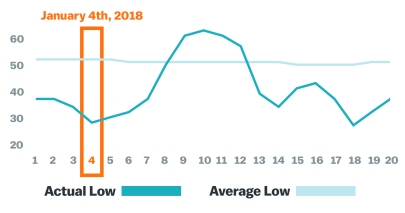 January 4th, 2018; a high of 54°F and a low of 28°F. Almost 20°F less than the historical average. An icy wind blew through the UD deck; students huddled together in the building’s halls for warmth. Josh Baker, junior, explained how he felt about this weather. “It was cold. Like really really cold. I’ve lived in Florida for ten years now and it was probably the coldest I’ve ever seen”. Jamaal Johnson, junior, also gave his input. “It was really cold, I was wearing two jackets and a long sleeve shirt”.

Clothing items made of athletic material like joggers or sweatpants are not allowed, even though they are good insulators, and sometimes the only options the students have.

However, not everyone agrees with a change in the dress code this drastic. Upper Division math teacher, Mr. Soler, states the importance of teaching students the correct attire for the real world, here are his thoughts “No, because in the real world you’re never going to be allowed to wear sweatpants in any sort of formal setting, I would go with jeans first before you go with sweatpants. If you want to change the dress code, then maybe jeans or people could be a little more liberal about the pants, but you don’t get to go from current dress code to sweatpants. I don’t think that’s reasonable.”

Mr. Soler’s argument is worth discussing. Academy at the Lakes is a preparatory school with its main goal being teaching students appropriate time and place, but then again, students having to walk between classes because of the school’s layout is something that most adults (depending on their workplace) wouldn’t do in a professional environment. “Allowing jeans would be a very fair compromise,” said Matteo Della Rocca, a ninth grader, in response to Mr. Soler’s argument.

Sweatpants are unprofessional and will not be allowed in a professional workplace. Jeans, however, are allowed in some workplaces. We agree with Mr. Soler and will be excluding sweatpants/athletic-material-joggers from the proposed idea.

Students, however, have their take on the proposed idea. Here is what Daniella Tello-Garzon, Academy senior, thinks of the idea “I feel like that’s a great idea because sweatpants are warmer and they would protect against the cold better. It would also cause students not to be thinking about the “oh I’m cold” and promote more focus and attention, it would be a better environment for everyone.”

Daniella’s point states that students could become distracted and uncomfortable by the cold weather. Cornell University conducted a study which concluded that when temperatures were warmer (77°F) employees make 44% fewer mistakes then when temperatures were low (68°F). Mr. Sullivan stated that he would definitely take the idea under advisement.

What do you think of Dylan’s proposed idea? How about Mr. Soler’s opinion? Comment below and tell us what you think!